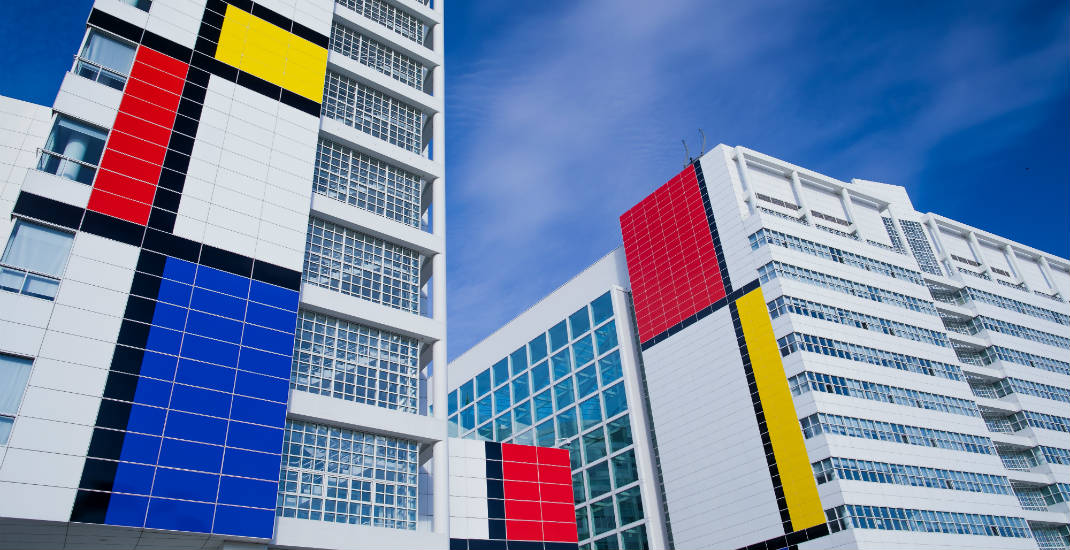 If you are visiting The Netherlands this year and venturing outside of Amsterdam (which I can only highly recommend) you’ll soon find yourself surrounded by blocks in yellow, blue and red. That’s right: we are celebrating 100 years of De Stijl. The Dutch art movement that forever put Dutch design on the map. And while many museums are hosting exhibitions, it’s just as easy to spot De Stijl on the streets of The Netherlands. Here’s where you should go.

In one of the oldest parts of my hometown Utrecht, hidden between ordinary houses, lurks the Rietveld Schröder House, striking in black and white, subtly decorated with primary colours and built from fearless rectangular planes. It is just one of the examples of seeing Dutch art movement De Stijl out in the open. No need to pay an entrance fee.

Piet Mondriaan and Theo van Doesburg founded De Stijl in 1917 and was mainly executed by artists, graphic designers and architects. De Stijl reduced art and design to the use of black, white, the primary colours and horizontal and vertical lines only. This year, at its centennial, we can learn more about De Stijl by just wandering around the cities that were most influenced by the movement that really put Dutch design on the map.

Since De Stijl was originally very popular by architects and creators of applied art it feels only natural that during the 100-year birthday celebrations new works of De Stijl inspired art have popped up all over The Netherlands. 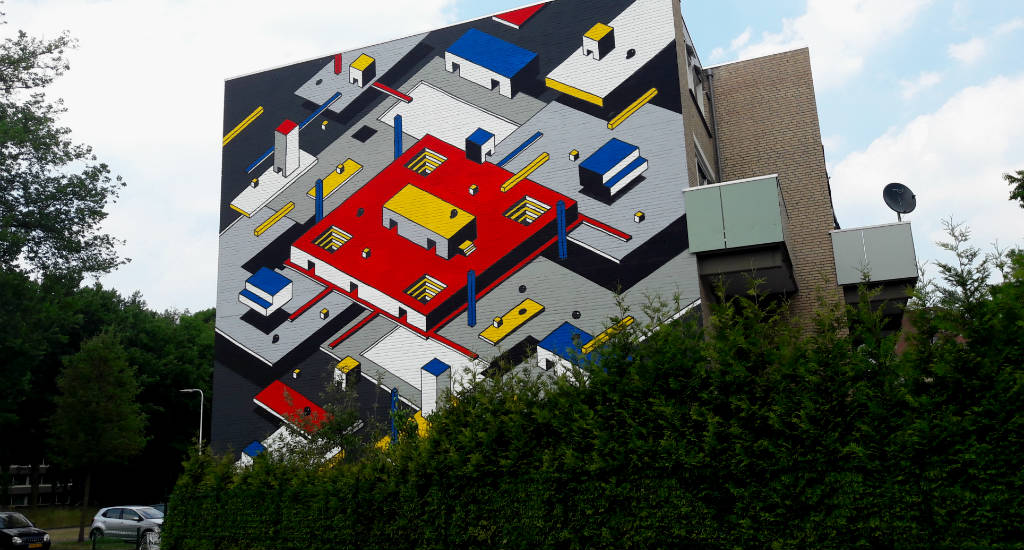 One very special mural has just been finished a 5-minute bike ride from where I live, in the Overvecht neighbourhood, a 10-minute bus ride away from the city centre. Johan Moorman painted his work within 48 hours and was completely inspired by De Stijl.

Recently, the Pieterskerkhof in Leiden has been completely transformed into a De Stijl open-air museum, by 20 artists from all over the world. Their murals can be admired until the end of August. Just around the corner at Gerecht the prototype of Maison d’Artiste, which was designed by De Stijl founder Theo van Doesburg, and Cornelis van Eesteren in 1923. This particular prototype has been an inspiration for architects ever since and this one was built by students of Delft University.

If you like to really to search for street art, go check out the bike parking just outside The Hague central station. The Hague Street Art has sponsored this particular piece and it’s so much fun to see this form of art used on something so practical. 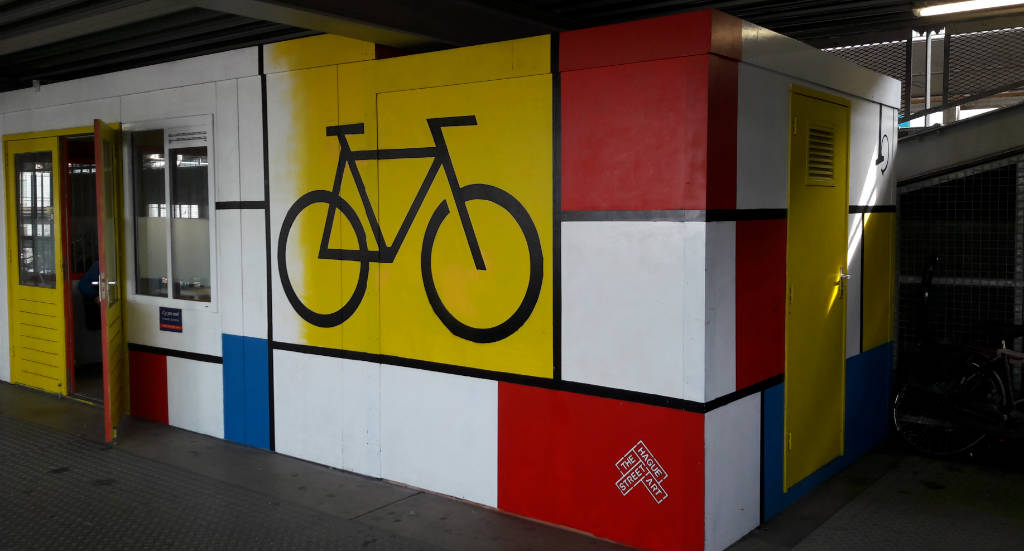 Another piece of De Stijl inspired street art I’d love to show you is not actually there anymore, but I found these photos on the Unurth website and thought they were just too good not to show you guys. The murals are made by Zime + Late. Aren’t these great?

One of the most iconic De Stijl pieces is the Red and Blue Chair by Gerrit Rietveld. He designed the chair in 1917 and it was painted in 1920. Because of the colours, the chair almost faded into the background of the Rietveld Schröder Huis where it was later placed. The original chair can be seen in the Museum of Modern Art in New York, but gigantic replicas can be seen this year throughout the cities of Utrecht and Amersfoort. There are large Red and Blue chairs next to Utrecht central station, near Oudergracht and in Amersfoort in front of the historical Koppelpoort. 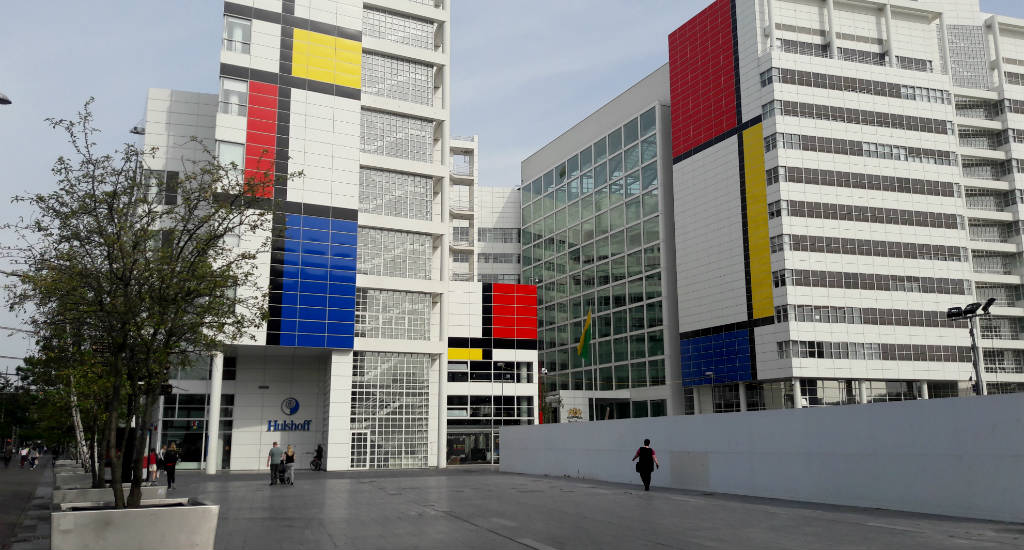 The cities that were influenced the most by De Stijl have taken up dressing up their most important and iconic buildings. Also, shops and even train stations have dressed up in primary colours only to celebrate 100 years of influential Dutch design.

The Hague has done an excellent job dressing up their iconic buildings. Recently, the recently renovated train station was completely dressed up like a Mondriaan painting. With blue, red and yellow glass windows, shop fronts and time table screens. Walking from the station you will immediately see the huge city hall completely dressed up. The frame of the building was already white with lots of rectangles, so turning it into a De Stijl inspired building wasn’t that difficult (although, placing all the coloured panels up the façade must have been quite the job!). And in The Hague city centre you should definitely sit on the Mondriaan steps at Spui, these are awesome. 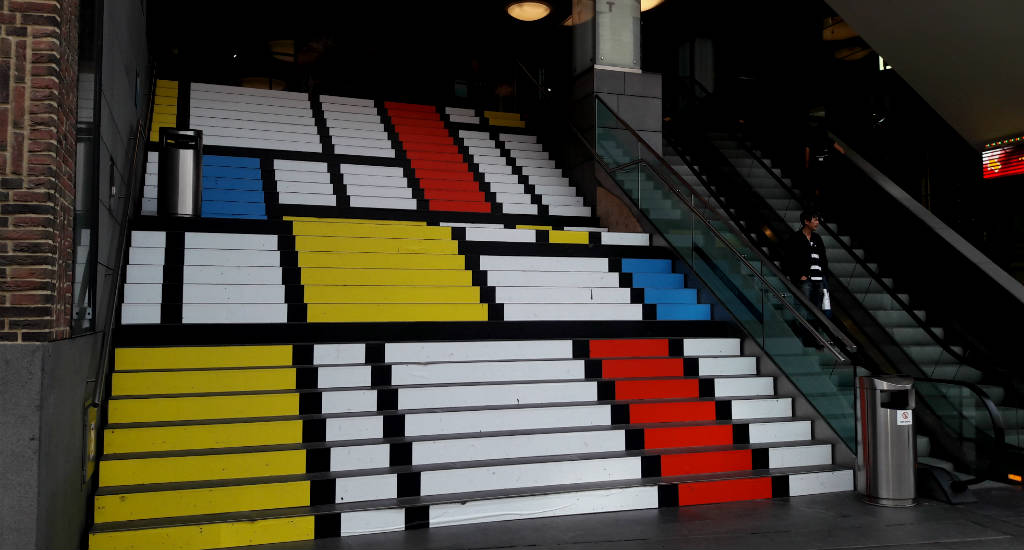 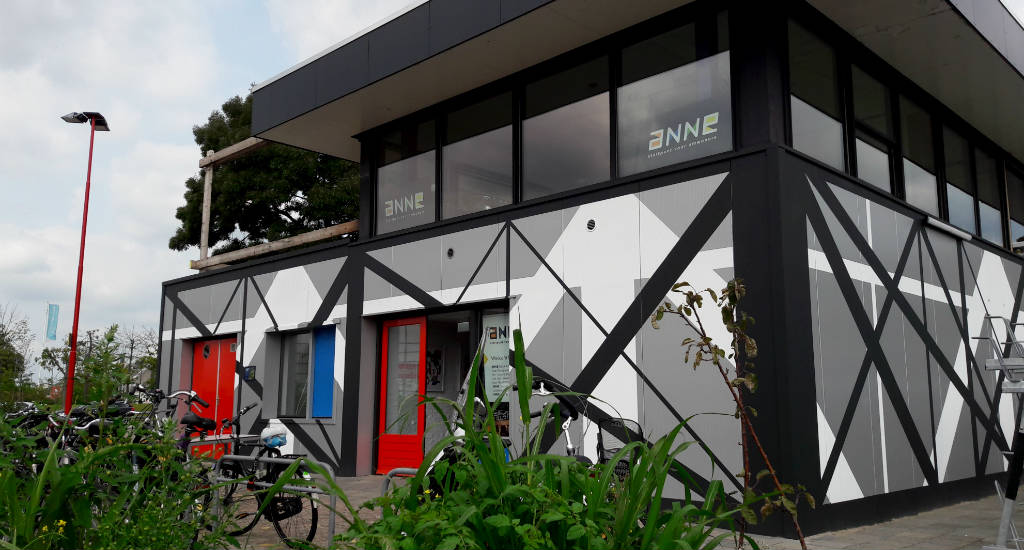 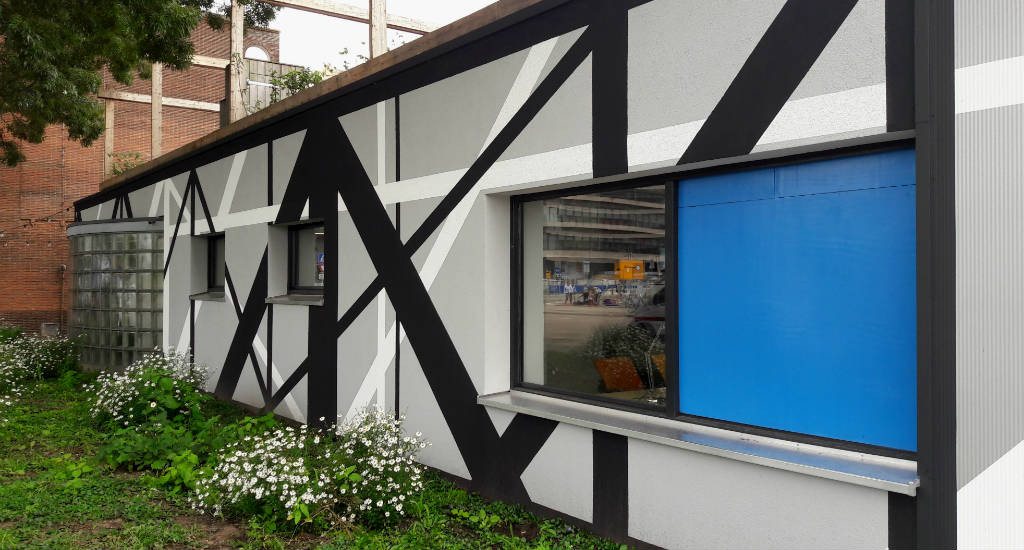 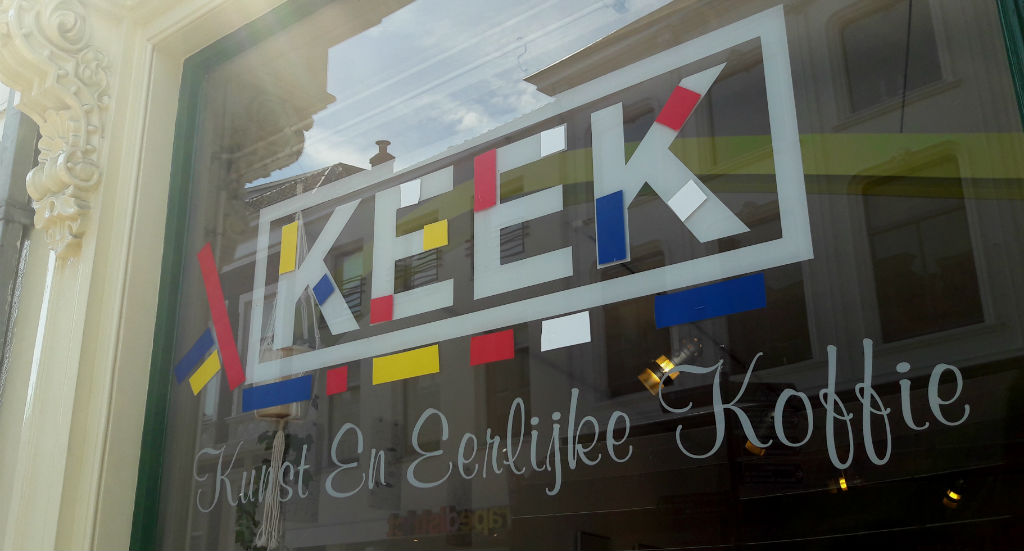 Another street art project was recently completed in Utrecht: the Anne building (owned by an organisation promoting green energy for everyone) was completely painted in De Stijl style by the team of Graphic Surgery, who make a lot of De Stijl inspired urban art. The building seems a temporary one, though I’m not sure how long it will stay where it is now, just next to the Utrecht tradefair.

A lot of effort has been put into dressing up window shops and because of this, a shopping trip can easily turn into a bit of a makeshift De Stijl themed city walk. If you follow, for example, the largest canal in Utrecht, Oudegracht you will see primary colours brightening up basically every shop alongside it. Same goes for shops in the The Hague Passage and several shops in Amersfoort and Leiden. Special mention for De Rode Winkel in Utrecht where you can also spot portraits of the pioneers of De Stijl, made by Utrecht artist Daniel Roozendaal.

If you’re a big admirer of Mondriaan, Rietveld and Van Doesburg, maybe you’d like to take your Dutch experience to a whole new level and sleep Victory Boogie Woogie style in Bilderberg Europa in by the beach in The Hague. The balconies of the hotel have been iconically painted red, blue, yellow. And Hotel de Tabaksplant in Amersfoort even has a Mondriaan inspired room, as the painter was born in Amersfoort.

This week I am featuring De Stijl on my Instagram page, using the #LoveDeStijl. You can also check out #100jaardestijl to see more excellent examples.

5 summer festivals not to miss in The Netherlands